I saw this great cartoon below the other day and it got me wondering about these dynamics and how to deal with it – especially because the vast majority of us are either interrupted (or do the interrupting) on a daily basis. It really is something to reflect on. 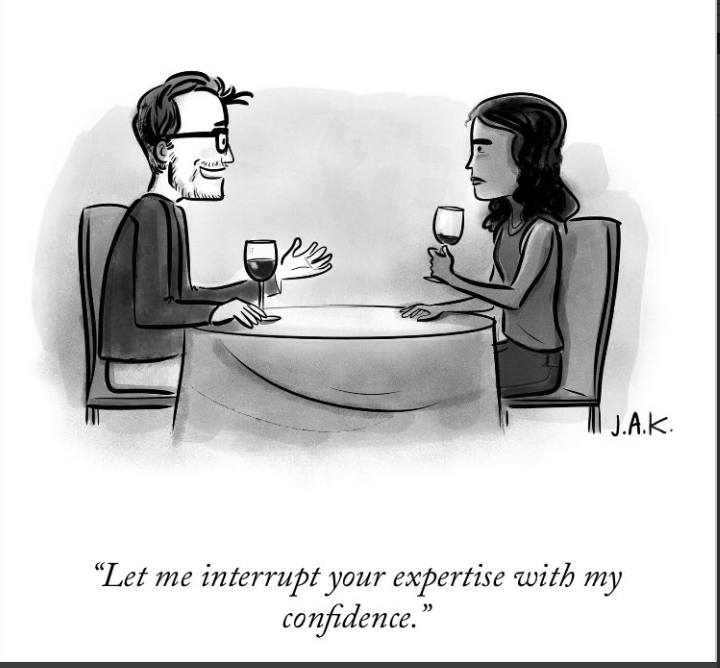 Who interrupts and why…

These little insights from Forbes are useful when trying to figure out which people are more likely to interrupt, and the reasons why…

Helping out or butting in?

Interruptions fall into two basic categories. “Collaborative interruption” is when someone jumps in to express agreement, or reinforce an expressed idea. “Intrusive interruption” is an intrusion that changes the subject, redirects the discussion – or hijacks the conversation entirely. Clearly it’s the latter that feels most obnoxious, but how we perceive the difference between the two can be subjective.

Recent research by Stanford’s Katherine Hilton, shows that how we perceive interrupting has much to do with our own approach to conversation. “Listeners’ own conversational styles influence whether they interpret simultaneous, overlapping talk as interruptive or cooperative. We all have different opinions about how a good conversation is supposed to go”, says Hilton, a doctoral candidate in linguistics. Her study found that speakers fall somewhere between two conversational styles; high and low intensity. High-intensity speakers have low tolerance for silence in conversation, and see overlapping talk as a sign of engagement. Low intensity speakers find interjections rude, and prefer that everyone speaks one at a time.

Numerous studies support the oft-cited claim that women are frequently interrupted by men.

Hilton’s research also highlighted gender bias, in that men were more likely to see women who interrupted as “ruder, less friendly and less intelligent than men who interrupted”, specifically when it was an intrusive interruption, involving a change of subject and raised voice.

Deborah Tannen, a professor of linguistics at Georgetown University in Washington DC, has long studied gender difference in communication. Her work explores the fundamental premise that men and women approach speaking with different aims: men speak to achieve power and status, women speak to forge connection. In conversations, men will interrupt to assert dominance, while women will hold back to preserve relationships.

Mike Henry, an executive at Scotiabank Canada, is well aware of the power dynamics inherent in communication. I (the Forbes author) recently heard him speak on a panel at the international Women’s Forum in Toronto, and was struck by how quickly and deliberately he conceded the floor to a female co-panelist after they offered overlapping responses to a question. He shared with me that he’s mindful of a leader’s role in modeling inclusive communication by ensuring that everyone has the opportunity to be heard. “I get energetic in conversations and I personally enjoy debate, so it’s a function of reminding myself that other participants might not have that same style. If you’re not careful, you can lose the value in the other person’s contribution. It’s about trying to leave space.”

Be willing to cut some slack. While you may feel dismissed or derailed by interruptions, the other party is likely aware only of their own eagerness to engage in the conversation. Separating intent from impact can defuse some of the frustration so that we can deal with the interruption calmly.

Get ahead of the problem.

Before you even start speaking, set the expectation that you want to get through your ideas: “There are a number of factors that lead to this suggestion, so please bear with me as I give the context. When I’m done, I’ll be happy to hear any reactions.” Setting this mini-agenda can avert interruptions before they happen.

Keeping the floor sometimes requires quickly and politely calling out an intrusive interruption. Simply drawing attention to the interruption by saying, “please let me finish”, can be enough to halt it. Or you can acknowledge their intent by saying, “I know you have ideas to share here, but first I’d like to finish my thought.”

Top female aides to President Obama created a strategy they called “amplification.” When a woman made a key point in a meeting, another woman would repeat it, giving credit to its originator.This both prevented and called out interruptions in male-dominated meetings, and ensured that the woman in question was recognized for her contribution.

A quick tip on managing and responding to interruptions

No one likes to be interrupted, and when it happens in a meeting, it can be hard to know how to respond. Do you just let it go? Or do you speak up?

Your reaction will depend on who is doing the interrupting. When a peer interrupts you, think about why they’re interrupting you in the first place. Consider their objective. If it’s to change the topic or get you to stop talking, you might say something like, “I’d like to finish my point. This is an important topic and I want to make sure that everyone is informed.” Acknowledge your colleague, but make sure you finish your point before conceding the floor.

If the situation gets awkward or stressful, consider reaching out afterward to clarify your intentions and smooth things over. On the other hand, if you find yourself interrupted by your manager or someone in a more senior role, wait for the meeting to finish. Then, reach out to them afterwards to schedule a one-on-one catch-up. You can say, “I noticed that you had some feedback. Is there something I could have done differently?” Hopefully together you can figure out how to be better aligned — and avoid interruptions — in the next meeting.

This tip is adapted from “How to Manage Interruptions in Meetings,” by Harrison Monarth

I’m planning a further post on this as the book I’m currently reading ‘Connect’ (by Bradford & Robin) has some great ideas and theories on the different reasons and reactions when it comes to interruptions, but in the meantime I would love to hear your experiences around interruptions. How do you deal with them?

PrevPreviousDo you want to be rich, or King? Why is it so hard to recruit senior staff (and some self-reflection)
NextWinner of the Outstanding Non-Executive Director 2021Next

© etc Advisory 2021, All rights are reserved

If you have something on your mind, a challenge you’re wrestling with or just want an alternative point of view, I’d be very happy to lend an ear and maybe help you start to unpick the issues.
Choose a date here.